Rules-Based Optimization has been designed to automate the process of advertising campaign optimization.

What is campaign optimization? It entails constantly monitoring statistics, analyzing the actual data and comparing it with the goals, then turning off non-performing sources and adjusting the CPC to more effective ones in order to bring the actual values ​​closer to the target value. As you can see, it is quite time-consuming and takes a lot of manual work.

That is why we have implemented the Rules-Based Optimization functionality. Our optimization rules not only extend to all possible conditions but also analyze the campaign performance with each statistics update, rather than checking once in a certain period of time.

Blocks the widget / sub-source, provided that the specified condition is met

(The coefficient itself is determined by the rule)

Changes the CPC coefficient to the value specified by you, provided that the specified condition is met

Next, let’s focus on the process of creating rules and have a closer look at each type.

Attention! This is the period for statistical data collection, according to which the rule will carry out optimization. It is not the frequency of launching the rule, our rules run continuously and reanalyze the data after every statistics update.

6. The last step is to select the action that the rule should take, provided that its condition is met.

There are two options:

The widget / sub-source will be blocked, but the rule will continue to take it into account, and in case the rule condition is no longer met, the rule will unblock it

We would recommend using the second option in two cases. This is useful for when the conversions (or the data on the earnings on conversions) is displayed with considerable delay, or when a rule is created in a campaign in which you have already blocked many of the widgets manually. In this way, the rule will check the blocked widgets one-time-only to see if they really should have been blocked.

P.S. We have also provided for the possibility of manual intervention in the process of advertising campaign optimization. If for some reason, in individual cases, you need to block or unblock a widget / sub-source contrary to the logic of the blocking rule, then you can do this, and the rules will take this action of yours as a command to ignore this widget / sub-source in the future (an icon in the form of a lock will be displayed next to them).

This type of rule is set up just like the blocking rule, the only difference is in the action. The rule should take when the specified condition is met. Here it is only one - to set the specified value of the CPC coefficient.

This type of rule also controls the coefficient, but unlike the Fixed Bid rule, it should not specify what coefficient is to be set under what condition; it calculates the required value itself based on your campaign goals. The target value can be specified for one of two indicators: conversion cost or ROI.

An additional action at the end of the rule advises the rule on which action is to be taken, which is when the target value of the indicator can be achieved only when the coefficient values or the CPC are below the minimum possible values ​​in the system. There are two options: to block the widget / sub-source (because the target value of the indicator cannot be obtained on it) or to uphold the lowest possible rate to keep the volumes of traffic from it.

We highly recommend using the Auto-Bidding rule together with the Auto-Blocking rule. Set them up, so that the auto-blocker could immediately exclude evidently non-performing sources, and then the auto-bidder could control the coefficient (increase and decrease it) where there is at least some result. Below you will find an example of such settings.

Besides, there is a simplified functionality of adding optimization rules for quick use.
To turn it on, you should choose the Optimization Rule Set option. 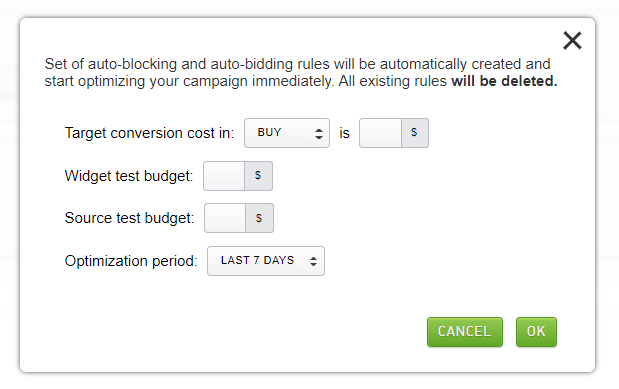