How to Exclude Low-Performing Publishers

When it comes to campaign optimization based on publisher performance, the MGID platform provides you with two options.

In this guide, we'll focus on the second option.

Blocking low-performing widget UIDs is a powerful feature that can boost campaign performance. However, use it wisely. Blocking too many publishers can cause a significant traffic decrease.

This feature will allow you to narrow in on publishers and exclude publishers in bulk.

How to use the feature?

Log in to your account, select the desired campaign and go to the Selective bidding interface. From there, you can view all the publishers serving your ad and begin the process of excluding publishers — whether it is one or multiple. Simply switch the (ON) button to (OFF) to exclude them from your campaign.

Filtering Publishers for a Specific Campaign

You can narrow in on publishers for a specific campaign. To start, click the Selective bidding icon. From there, you can view all of the publishers currently recommending your content for that particular campaign.

To exclude multiple publishers at once, you have two options.

The first method to exclude publishers in bulk is to proceed to the Selective bidding interface. Next, select the publishers you want to exclude by checking the corresponding boxes in the left-hand column.

Then, in the upper left section of the page, select the lock icon. This will exclude the selected publishers. 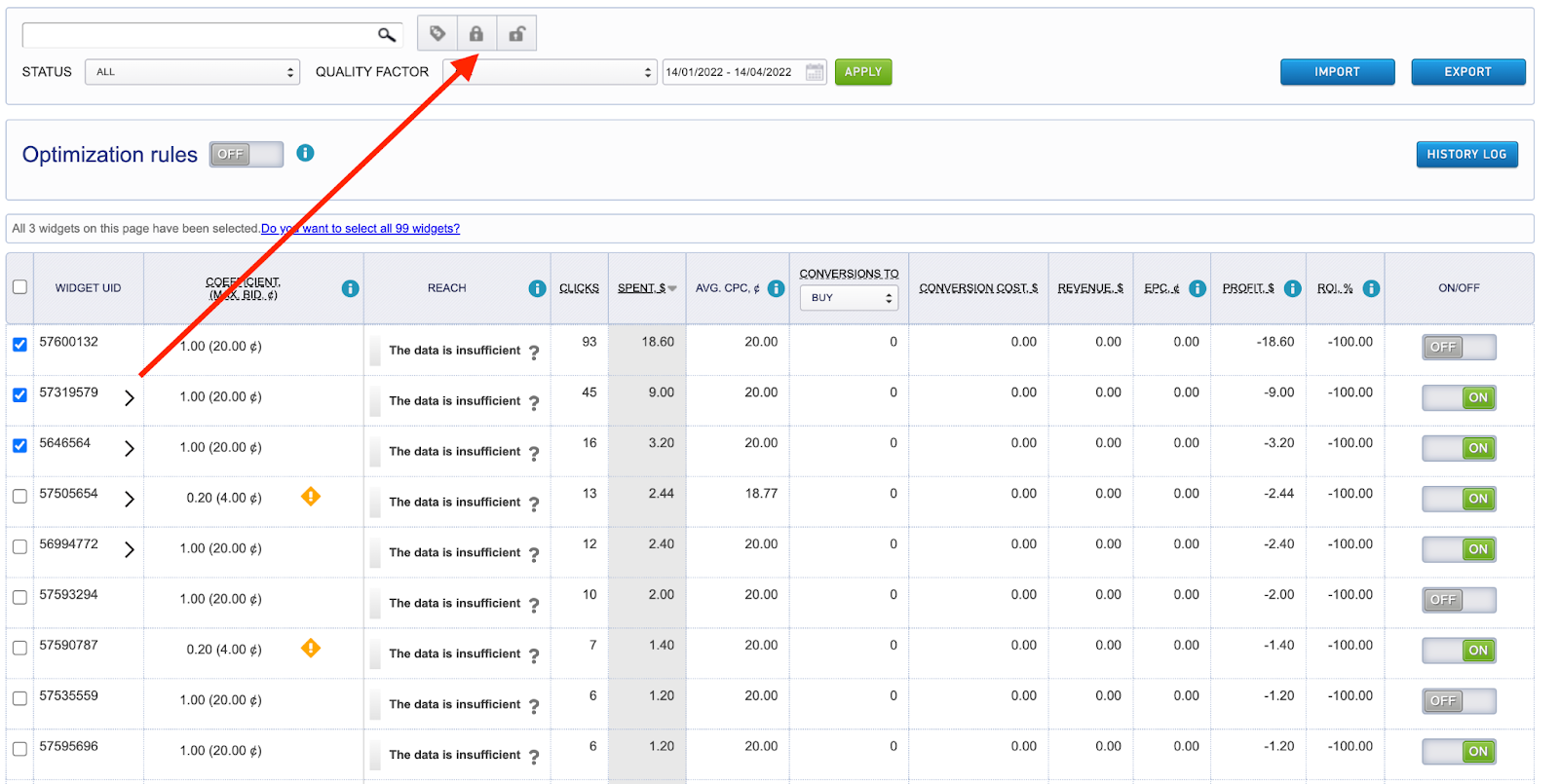 Now, we move on to the second procedure for mass publisher exclusion.

You can make bulk exclusions using the Import — Blocklist option. First, export your campaign-specified report from the dashboard to find the UIDs you want to exclude. Next, create a CSV file of the widget UIDs you wish to exclude. When complete, click the Blocklist option under the Import button in the upper right corner of the page. You can upload up to 1,000 entities per insertion.

If you run into any errors or have questions regarding this feature, feel free to contact our team, and we’ll be happy to guide you.

Can I upload a blocklist before launching an advertising campaign?

Yes, you can upload a blocklist, using the import script described above, before launching a campaign.

Can I copy a blocklist from one campaign to another?

Yes, when copying an advertising campaign, you also have the opportunity to copy the blocklist.

Another method is downloading the blocklist from the current campaign by exporting after selecting all blocked UIDs. After, import this file (your blocklist) into a new campaign in the Selective bidding interface.

Note: When copying a blocklist, coefficients relative to UIDs are not copied.

Can I see all UIDs that are currently blocked?

Yes, by utilizing the blocked filter — and filtering by UIDs — in Selective bidding, you will see a list of all blocked sites.